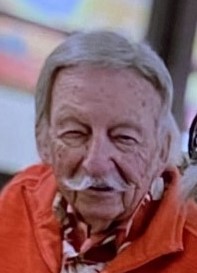 Mark was born April 24, 1923 in Morgan, Utah to William Richard and Beatrice (Barnes) Eddington. After his mother’s death when he was an infant, his father married Ethlyn Barnes, who became his beloved mother. He graduated from Springville High School and from the University of Utah with a Bachelor’s Degree in Business. While attending the “U,” he was an active member of Sigma Nu Fraternity.

Mark served in the US Navy during WWII, and after attending flight school, became an Aerial Navigator. He was on active duty from 1943-1946. After the war, he became a licensed fixed wing pilot, and he continued flying for 50 years, transporting his family on many adventures in the air!

In 1950, Mark met Jackie Anderson, the love of his life, and they were married four months later at the Aviation Club in Salt Lake City, Utah on December 21st. They just celebrated their 70th wedding anniversary this last December. Mark and Jackie worked together for many years in various entrepreneurial businesses and settled in San Marino, California in 1966, until retiring in Rancho Mirage. During their years in San Marino, Mark and Jackie made many great friends through their involvement in the Church of Jesus Christ of Latter-day Saints, and held fond memories of this time in their lives.

Right from the start, when they honeymooned in Sun Valley, they enjoyed many sports together, especially tennis and snow skiing. In fact, Mark was still playing tennis a few months before his passing, with his tennis buddies at the Rancho Las Palmas Tennis Club. He was a real sports enthusiast to include: fishing, boating, flying, golf, horseback riding, sports cars, and of course, tennis and skiing. Mark and Jackie and their daughters spent many wonderful trips skiing in Park City, Utah with their lifelong friends. Mark was a sports team fan as well, and watched baseball, basketball, football, tennis, golf and any other “big game”  that was being televised. He and Jackie were LA Dodgers season ticket holders when they lived in the Los Angeles area, and he never missed a Lakers game.

Mark was an avid reader and had a lifelong interest in U.S. History, particularly the Civil War and WWII eras. His real passion, however, was spending time with his family. He was much loved by his wife, daughters and sons in law, grandchildren, brother and many nieces and nephews. He is survived by his wife, Jackie: his two daughters and their husbands, Debra and Jeff Cottrell and Nancy and Jim Wedick; his five grandchildren, Chris (Joy) Cottrell, Cory (Chari) Cottrell, Devon (Ginger) Cottrell, Jimmy (Landra) Wedick and Jacqueline (Taylor) Heninger; eleven great grandchildren; and brother Robert (Vera) Eddington. He was preceded in death by his sisters Roslyn (Tom) Peterson, Dorothy Eddington, Joan Eddington and great grandson, Joshua Cottrell. Mark will be sorely missed by his friends and family for his good nature, sense of humor, generosity, great zest for life and his absolute refusal to grow old!

Graveside services will be held Monday June 7, 2021 at 11 am at South Morgan Cemetery in Morgan, Ut with Veterans honors provided by Morgan veterans and the US Navy Honor Guard.

To order memorial trees or send flowers to the family in memory of William Eddington, please visit our flower store.