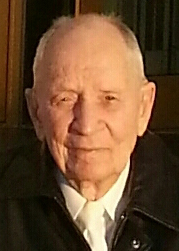 Bill was born on October 12, 1923 in Arco, Idaho, to Angus William Barnes and Hortense Dorothy Peterson.  He attended Arco schools and graduated from high school in 1941.  Bill served in the Army Air Forces in the Pacific from 1943 until 1945 as a radio operator attaining the rank of staff sergeant.

After his military service Bill attended the University of Idaho and graduated with a degree in mining engineering.  Bill was an avid rock hound and enjoyed exploring many mining properties during his life.

On December 23, 1949 Bill was sealed to the love of his life, Lola Gene Passey, in the Idaho Falls LDS temple.  They enjoyed fifty-three wonderful years together.

After retirement Bill kept busy with western landscape painting, journal writing, poetry, reading, yard work, organ playing, and novel writing.  He completed his first novel, “Captain Bear and the Ice Princess”, in 2009 even though he was mostly blind.

Bill was a faithful member of the Church of Jesus Christ of Latter-day Saints and served in many positions including branch president, bishopric counselor, stake president, Sunday school teacher, singles representative, and ward mission leader.  His favorite assignment was working as an ordinance worker in the Idaho Falls LDS temple for over 12 years.  Bill was also a member of the VFW, an avid HAM radio operator, and enjoyed his friends at the Jerome, Idaho and Morgan, Utah Senior Centers.

Thanks to the many friends who have visited Bill over the past few months and especially to the Encompass Hospice group for their wonderful care.

To order memorial trees or send flowers to the family in memory of William Barnes, please visit our flower store.