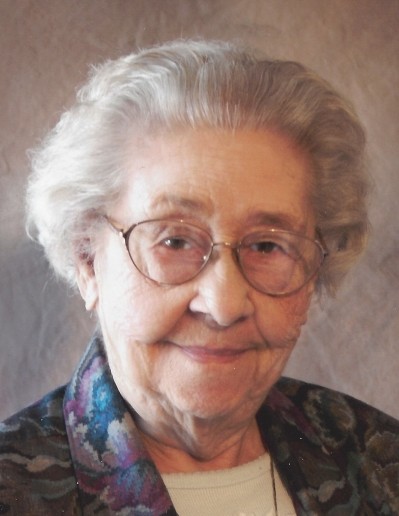 Our beloved mother, grandmother, and great-grandmother passed away peacefully in her sleep surrounded by family on June 15, 2015 at the young age of 99.

Wanda was born January 25, 1916 to Agnes and Ebenezer Russ Young in Wanship Utah.  She was the first class Valedictorian of North Summit High School in 1933, and later graduated from LDS Business College.  She married her soul mate Warren Hobson Spriggs in the Salt Lake Temple.  They then built their home in Hoytsville, UT where she lived out the remainder of her days.

Wanda was employed by the Summit County Extension Service for several years prior to serving as Field Representative and Auditor for the U.S. Dept. of Agriculture in Logan.  She was later elected Summit County Recorder, which she proudly served for 28 years.  During which she also served as Vice President of the Utah Association of Counties.  Wanda was a member of many community organizations including Business and Professional Woman’s Club for 62 years and was chosen “PBW Woman of the Year” in 1938 and 2000; and “Woman of Achievement” in 1955.  In February 2000 she received the “Community Builders Award” at the Summit County Senior Citizen Honor Night.  She was a member of the Coalville Literary Club, and Daughters of the Utah Pioneers, where she was able to showcase her talent as a quilter.  Wanda was an active member of the LDS Church serving many roles.  She loved working in the Coalville Stake Family History Center where her passion was genealogy.  Wanda also served a two year mission in the Virginia-Roanoke Mission instructing the Genealogy Program.  Wanda was well known for her love of making and collecting dolls.  However her main priority in life was her family; nothing made her happier than spending time with them.

Wanda was preceded in death by her parents; her husband Warren Hobson Spriggs; brothers: Eb, and William; sisters: Leone, Beverly, and Matilda; grandson: Allen Broberg.   She is survived by her three children: Alan (Lynette) Spriggs, Jeanine (Dale) Broberg, and James Spriggs; 7 grandchildren, and many great-grandchildren.

Funeral services will be held at the Hoytsville Ward Chapel on Saturday, June 20 at 12 noon, with viewing from 10 to 11:45 am prior to services.

To order memorial trees or send flowers to the family in memory of Wanda Spriggs, please visit our flower store.