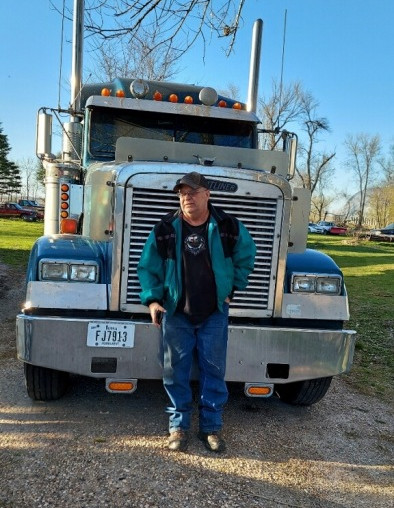 Ron Scott Randall, 60, passed away May 20, 2022 in Layton, Utah at the home of his beloved companion Karla Cole.

He was born Feb 9, 1962 in Ogden, Utah to Homer Fielding and Jeanice Tonks Randall.

Ron grew up in Milton, Utah.  He attended school in Morgan, Utah graduating from Morgan High School in 1980.  After graduation he was employed at McKay Dee Hospital working as a materials management clerk. Later he worked for various trucking companies in Utah.  In 2008 Ron moved to Klemme, Iowa where he bought his own semi and contracted with various companies allowing him to travel extensively across the United States and Canada.  Ron lived in Klemme for 13 years where he made many close friends. One of those dear friends was his trucking buddy Kent who lived next door and his dirt track friends especially the Hanson family.

Ron played little league football, 70lb division, in 4th grade.  He had a very good team winning many games but never a championship and was remembered as a good player.  Ron also played basketball and was remembered by teammates as an excellent shooter.

Ron enjoyed dirt track car racing held in Britt, Iowa and Mason City, Iowa.  For many years he helped sponsor two cars.  One for Blaine Hanson Racing and one for Jace Hanson Racing. Ron had many close friends in the racing circuit. Ron had a great desire to have his own drag car but those hopes and dreams came to an end when he was diagnosed with cancer.

In July, 2019 Ron was diagnosed with invasive colon cancer for which he had surgery.  In Nov 2020 the cancer had returned and was now advanced.  In Nov 2021, Ron said goodbye to his many friends in Klemme and surrounding areas and came to Layton, Utah to live his final months with his companion Karla.

The family would like to thank all his wonderful friends in Iowa for their lasting friendships and compassion they showed to Ron.  Thanks to all the caregivers from CNS Hospice especially Deanna, Joslynn and Andrew.  A special thanks to Karla for her dedication in helping Ron throughout his life and especially the last several months of his life.

Ron is survived by his brother Bryant (Annette), and sister Debbie (Dave) Pike of Milton, Utah.

Ron is preceded in death by both of his parents.

Cremation is under the direction of Walker Mortuary, Morgan, Utah.

To order memorial trees or send flowers to the family in memory of Ron Randall, please visit our flower store.