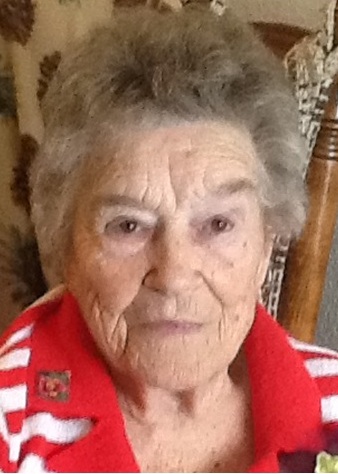 On Tuesday, October 3, 2017, heaven became even more joyful and happy as it welcomed another angel. Rhea Jaques Stephens Iverson (94) passed away peacefully with family and friends at her side at the Elk Meadows Assisted Living, Oakley, Utah.

Rhea was born in Layton, Utah, on May 8, 1923, to John Franklin Jaques, Jr. and Tillie Darlene Clark. She spent her childhood in the tiny community of Devil’s Slide and attended school in Morgan. She married Vaughn Otto Stephens in 1944, later divorced. During that marriage they lived in Star Valley, Afton, Wyoming, where she was bookkeeper for Otto Stephens’ Cowboy Club and the Golden Spur Café. They were blessed with two sons: Michael V. Stephens and Frank O. Stephens.

She later moved to Salt Lake City where she worked for several years for Skaggs Drug Store.

In 1965, she became reacquainted with Monroe Iverson. They married December 10, 1965, and lived in Henefer. Those years were full of fun and happiness, fishing and traveling together until his passing in 1990.

Rhea was a member of the Church of Jesus Christ of Latter-day Saints. She and her fellow Relief Society sisters made hundreds of quilts and blankets for members of the ward and community. Her quilting and crocheting were outstanding.

Rhea is survived by her son, Frank O. Stephens and and Elisa Hickey of Fernley, NV; daughter-in-law, Linda and HJ Frank, Eden; brother-in-law, Homer Foust, Coalville; grandson, Kyle and Jennifer Frank, Lehi, and their four children; a special neighbor family who became part of her life, Jim and Marva Richins, Henefer, Cade and Erin Richins and two sons, Evanston WY; Katie and Braydon Tholen and son, Henefer; and numerous nieces and nephews who loved her and will miss her.

The family wishes to thank all the staff at Elk Meadows for treating Mom as family, Symbii  Home Health and Hospice nurses, and all family members who visited and cared for her so lovingly.

To order memorial trees or send flowers to the family in memory of Rhea Iverson, please visit our flower store.