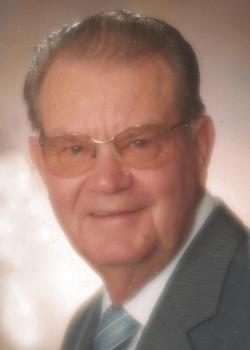 Reed A. Warner passed away peacefully on Sunday June 22, 2014.  Reed left this world to join his love Roberta.  What a reunion that must have been!  Reed was born Aug. 2, 1926 to Adrian and Marie Madsen Warner in Fountain Green, UT; the oldest of 5 children. His family settled in Coalville when he was 7 years old.  He attended North Summit schools and served In the US Army towards the end of WWII.  In 1953 he married the love of his life, Roberta Duncan.   Reed has served his community throughout his adult life in various roles.  As a young man he worked alongside his brothers Bill and Karl at the Warner’s Garage.  He served for many years as the Civil Defense Director for Greater Summit County, volunteer fireman for North Summit and later as Summit Co Fire Chief.  He drove the ambulance as a volunteer and was also the Summit County Fire Warden.  He was instrumental in getting the Civil Defense siren placed in town as well as the property and building for the current Fire Station in Coalville.  He also served as Justice of the Peace, worked at the Coalville and Henefer Post Offices and helped Roberta run the Norge Village Laundromat.  The town of Coalville was very special to Reed and it was his pleasure to be an active part of the community.  He also enjoyed being part of the American Legion and JayCees.

Raising his two girls with his wife Roberta brought him so much joy and laughter.  His wife and daughters were his world and he always made sure they knew that.  He was an amazing man who gave so much love and guidance to his entire family.  He always had knowledge to share and was always who everyone went to for advice. His grandchildren have many cherished memories of working with him in the garden and going for rides on the lawnmower. He adored all of his great-grandchildren, his grandsons-in-law and his newest granddaughter-in-law.

Reed is survived by his daughters Rosalind Warner and Reeda Warner, Grandchildren & Great Grandchildren Stephanie Opheikens (Lexie and Zaen), Natalie and Matthew Everett (Camden and McKenna), Melissa and Scott Simar (Aviry, Ella and Emrie), Matthew & Telissa Roemer, his brother and sister in law  Karl and Bernice Warner along with many nieces and nephews, and many amazing friends and neighbors.  Proceeded in death by his loving wife Roberta, sister Marjorie, brothers Bill & Richard.

Funeral services will be held Wednesday, July 2, 2014 at 12 noon at Walker Mortuary in Coalville, Utah (268 South Main). A viewing will be held Tuesday evening from 6 to 8 at the Mortuary and prior to the services on Wednesday from 10:45 to 11:45. Interment will be at the Coalville City Cemetery.

To order memorial trees or send flowers to the family in memory of Reed Warner, please visit our flower store.