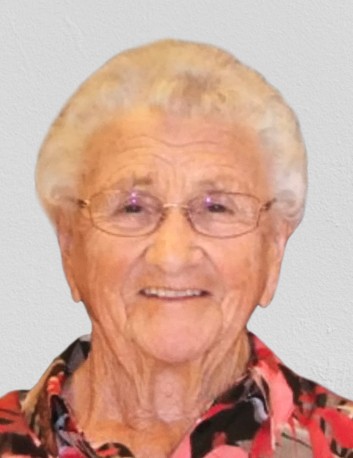 She was born February 24, 1922 in Wanship, Utah, a daughter of James P. and Pearl Thomson.

Her youth was spent as a city girl. She and her brother, Kay spent their summers swimming in Como Springs and their winters skiing, ice skating and reading. Her mother was a school teacher and because her father worked on the railroad, everything in the household ran on time - a strong trait she abided by her whole life and tried to instill in her children.

In high school, she was active in the music programs - singing in the choir, and playing clarinet and violin in the concert and dance bands.

On October 15, 1940 she married Earl Homer Waldron in the Salt Lake Temple. She moved to Richville in Morgan County and became a farmer’s wife. Together, she and Earl raised seven children.

She loved living on the farm and her whole life was devoted to taking care of her family. She was a strong literacy advocate and made sure all of her children and grandchildren learned to read.

Phyllis was an active member of the LDS church and served in many of the organizations as a teacher and held several leadership positions throughout the years.

She was preceded in death by her parents, husband, one daughter, Shelley; and two sons: Craig Earl and Rex T.; and son-in-law Cary C. Cobb.

A special thanks to all the staff at the Family Tree of Morgan for creating a home for our mom over the past two years and for the special care given during the final days of her life.

To order memorial trees or send flowers to the family in memory of Phyllis Waldron, please visit our flower store.