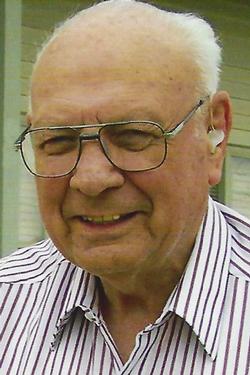 Paul Thomas Jeppson, born March 30, 1920, passed away in his home on January 31, 2015, surrounded by his family. Paul was born to Samuel Leland and Mary Thomas Jeppson in Malad, Idaho and spent part of his early childhood in Willard, UT and Hill Spring, Alberta, Canada.  He graduated from high school in Caldwell, ID.  He was the third of thirteen children; all preceding him in death.

Paul met Marcella Morris, the love of his life, in San Francisco, while awaiting discharge from his service with the U.S. Navy in WWII.  On November 18, 1946, just six weeks after meeting, they were married in Berkeley, CA. Their marriage was later solemnized in the Logan, UT Temple.  They lived in San Bruno, CA and later Cupertino, CA.  Paul worked for United Airlines in San Francisco after his discharge from the Navy, followed by 25 years with Varian Associates.

Paul and Marcella were blessed with five children: Wilford “Bill” (Janice) of Centerville, UT; Samuel (Wendy) of Kaysville, UT; Gary (LaMoyne) of Kingman, AZ; Dianne Adams of West Haven, UT; and Robert of Salt Lake City, UT.  Marcella preceded Paul in death in 1972.  Paul is the grandfather of 24 and great-grandfather of 49 children.

Paul was married to Marylyn Eyer of Fremont, CA, from 1973 to 1982.  After retiring in 1982, he moved to Des Moines, IA, where he met Marlys Strand.  They were married in the Salt Lake Temple in 1983 and together served an LDS Mission in Ghana, Africa. Marlys preceded him in death on April 9, 2005.

During his life Paul served as bishop of the Newark, California Ward and a counselor in the Fremont, California Stake presidency.  He dedicated his life to serving others.  Paul completed a dream in building his own home in Morgan, UT at the age of 75.

Paul and Marlys were very blessed with a multitude of wonderful, caring neighbors in Morgan. As a family, we wish to thank his neighbors and ward members who have shown him so much kindness.  We also want to recognize and thank the compassionate people from Hospice For Utah who assisted in Paul's care during in his final days on earth. We are so grateful to everyone who has touched his life.

To order memorial trees or send flowers to the family in memory of Paul Jeppson, please visit our flower store.