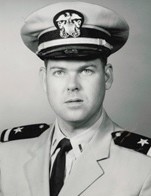 Lt. Norman Leon Hansen II passed away at the age of 84 in his Mountain Green home on Saturday, May 19, 2018 due to lung cancer. Norm was born on Sep. 26, 1933 to Norman Leon Hansen and Mary Viola Hansen in Orange County, California. He spent his childhood growing up with three brothers in various locations in California, Arizona, southern Utah and the Salt Lake City area. Norm graduated from East High School in Salt Lake City and was blessed to meet Fay Devey through a family friend. They fell in love, were married in 1954, and Norm shortly thereafter joined the US Navy. Norm trained in electronics In the Navy and was commissioned as an officer serving through the entirety of the Vietnam War aboard air craft carriers as an ordinance officer. Norm and Fay made their home all over the United States during his twenty-one year career with the Navy.

Following retirement from the Navy, Norm and Fay settled in Mountain Green, Utah where they spent forty-three wonderful years. Norm was an avid ham radio operator, aircraft pilot and flight instructor, reader, gunsmith, motorcycle rider, mechanic, and able to learn and do almost anything.

Norm is preceded in death by his parents and three brothers, Dick, Gary, and Gayland. He is survived by his wife Fay, his son Norman Leon (Mary Jo) Hansen III, daughter Karen Fay (Steve) Jackson, four grandchildren, and six great grandchildren who were the delight of his life.

To order memorial trees or send flowers to the family in memory of Norman Hansen II, please visit our flower store.