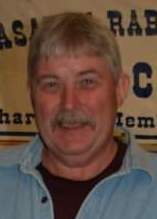 He was born to Don and Ethel Taylor. He grew up in Henefer, Utah later his family moved to Morgan, Utah where he attended Morgan High school and was a part of the wrestling team. He graduated from Morgan High School in 1973. He married the love of his life Nancy Kennedy on January 16, 1976. They were later sealed for time and all eternity in the Ogden, Utah Temple.

Mark worked as a butcher for many years, starting out at Taylor's Market, Roger’s Thriftway, Morgan IGA, Jubilee Foods, and Ridley's Family Markets. He also cut game meat for many Morgan locals. He had a great love for the outdoors and could be found fishing, hunting, or hiking. He spent 20 years applying for the Utah Shiras moose permit. Finally drawing in 2017, taking a 43” bull he was very proud of. Mark enjoyed traveling across the country showing nationally competitive show rabbits. He won many awards and made some lifelong friends. There was never a time when Mark didn’t have a diet pepsi in his hand.

He loved his family with all his heart and was happiest when he was around them. Mark leaves behind two best friends Ty Gordon and Sydnie Colvell who meant the world to him. Mark is preceded in death by his wife, Nancy Taylor, and parents Don and Ethel Taylor. He is survived by his three daughters, Amber (Brandon) Gordon, Sara (Jeff) Harris, Erin (Dan) Colvell, 6 grandchildren: Ty (Kinzee) Gordon, Kelsey (Bryan) Chappell, Sydnie, Sawyer, Sage Colvell, and Glory Harris; 4 great grandchildren: Ava, Anson, Ayla Gordon, and Wesley Chappell. His Siblings Anne (Glenn) Wilde, Robert (Margert) Taylor, Jeanne (Jerry) Comer, and Jim (Penny) Taylor. He loved his grandchildren, and great grandchildren with all his heart.

A visitation will be held Thursday October 8 from 6:00-8:00 at Walker Mortuary, 45 West 200 North Morgan, Utah, and Friday October 9 at the Morgan Rock Church from 11:30-12:30. Funeral services will be at 1:00 at the Morgan Rock Church, 10 West Young Street Morgan, Utah. He will be buried alongside his wife Nancy Taylor at the South Morgan Cemetery.

If you have a fun Memory of Mark to share with his family please email memoriesofmark@hotmail.com

To order memorial trees or send flowers to the family in memory of Mark Taylor, please visit our flower store.