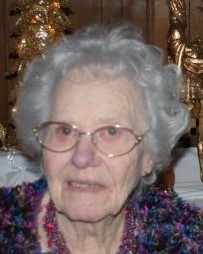 Marjorie Andelin Crittenden passed from this life on January 3, 2019, just shy of her 98th birthday. Marge was born January 27, 1921, in Richfield, Utah, to Bertran Youth and Gladys Genevieve Jensen Andelin. She was the third of seven children.

Growing up in Ogden, Marge attended Ogden City schools and had a strong interest in theater and dance. During her time at Weber State College, she majored in art and performed with the Orchesis Dance group. She was active in Girl Scouts and earned her Golden Eaglet which is equivalent to the young men’s Eagle Scout.

Don graduated from the Agricultural College (Utah State University) with a degree in education and moved Marge and their first child to Roosevelt, UT. In 1957, they moved back to Ogden. Marge immediately went to work at Klenke Floral where she stayed for over thirty years becoming their lead wedding designer and head Christmas display artist. Flowers played an important part in her life. Her home and yard were a showplace for flowers.

Marge had a deep love of the arts in all forms. She enjoyed the theater and regularly held season tickets to Ballet West and other theater groups.

On one summer afternoon in 1973, she and her sister happened upon a small theater group setting up for a performance on the Southern Utah University campus in Cedar City. They attended the performance of Shakespeare’s Midsummer Night’s Dream. This was the beginning of a passionate relationship with the Utah Shakespearean Festival. She attended the festival religiously and saw every play, every year for the next forty-two years.

She was an accomplished painter. When she was young, Marge often accompanied her father (well-known artist B.Y Andelin) on trips where he would paint directly from nature. As a result she had a love of the beauty and majesty of nature and how it translated to a canvas.

Marge was extremely inventive and imaginative. She could make the most beautiful creations out of the most common materials. She was renowned for her detailed and artistic centerpieces and decorations.

Music also held a special place in her heart. She taught her children to appreciate not only the visual arts but the beauty of music as well. Marge sang in choirs and she would often be heard singing her part around the house.  She loved classical music and musical theater show tunes.

In 1961, the family moved to Morgan where Don and his sons built the family home. She took great pride in decorating her home, changing the décor with each season or holiday.

Marge immediately became an active and influential part of the community. She belonged to two separate Daughters of the Utah Pioneers camps. She joined a literary club. She rode in the posse. She sang for many years with the community choir.

As an active member of the Church of Jesus Christ of Latter-day Saints, Marge was a devoted and well-loved teacher. Later in life, she spent many years in the extraction program dealing with German records.

Marge leaves her posterity a legacy of the joy of living; of the importance of appreciating God’s beautiful world; of gratitude for their talents and appreciation for the talents of others; and of the desire to make the world a better place.

Marge was greeted on the other side by her parents, husband Don, son Karl, two brothers, two sisters, and two grandchildren.

Condolences can be sent to the family through Walker Mortuary at:

To order memorial trees or send flowers to the family in memory of Marjorie Crittenden, please visit our flower store.