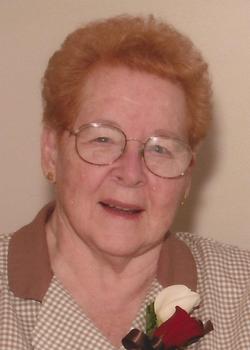 MORGAN a�" Lillian Kay Christensen Carter passed away peacefully at her home on October 16, 2014 with her loving husband by her side.

She was born in Los Angeles, CA on Sept. 29, 1933 to Otto James, Jr. and Martha Adelaide Gilliland Christensen. She was raised in South Gate, CA and graduated from South Gate High School in 1951.

Lillian was married to Gene C. Carter on March 10, 1951 in Las Vegas, NV. They were later sealed together in the St. George Temple. Together they raised their family in Southern California. She was a faithful member of the Church of Jesus Christ of Latter-day Saints. She served in numerous callings, including Primary President, Relief Society President and Young Women's President. She also supported her husband while he served in two bishoprics.

She loved her large family, especially her eternal companion of 63 years. He has been by her side and lovingly taken care of her. She is survived by her husband, three sons, Bret (Debbie) Carter, Jeff (Georgene) Carter, Tom (Linda) Carter and one daughter, Malinda (Ray) Carter. Also surviving are 20 grandchildren, 31 A½ great-grandchildren; her sister, Lois Paulson and brother, Howard Christensen.

The family would like to thank CNS Hospice for the loving care they gave to Lillian over the past 3 years. A very special thank you to Sonia and Shaleece for their care and compassion. They became an important part of our family.

To order memorial trees or send flowers to the family in memory of Lillian Carter, please visit our flower store.