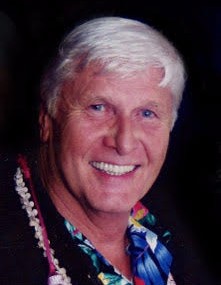 Lew Roy Cook, our beloved father, grandfather and great grandfather, age 91, of Phoenix, Arizona, passed away on August 20, 2017. He was born in Salt Lake City, Utah May 14, 1926 to Newell B. Cook and Edna (Dickson) Cook.  He was their only child, and he was loved beyond measure.  He lived in Morgan, Salt Lake City and Ogden Utah, graduating early from Ogden High School.  He attended the University of Utah where he was the freshman class president.  He married his high school sweetheart, Elaine Dickson, while on leave from the U.S. Navy, on January 31, 1945.  He left his new bride to continue serving his country.  After the war, they moved to Arizona and he earned his Juris Doctor Degree from the University of Arizona.  He practiced law for over thirty years in Phoenix, where he specialized in estate and tax planning.  Dad was the smartest person we knew and he lived more life in his first twenty five years than anyone can imagine.  He ran a café at 16; a fish hatchery at 17, still graduated a year early, tried his hand at acting, sold custom clothing in Alaska and sold rena ware to get through law school.  He and mom loved to play tennis and dance. He was a true leader and hero to his children and grandchildren. He was a teacher to the very end and his influence will be felt by all who knew him. Dad loved the Constitution, freedom, this country and the American flag, which was always displayed in his yard.

He is preceded in death by his wife, Elaine and his only son, Stephen Lew, who passed away exactly two months ago, leaving a hole in his heart too big to heal.  He is survived by his daughters Carolyn (Craig) Langstraat, Susan (Dave) Updike and Katie (Tom) Kauffman, 19 grandchildren and 44 great-grandchildren.

To order memorial trees or send flowers to the family in memory of Lew Cook, please visit our flower store.