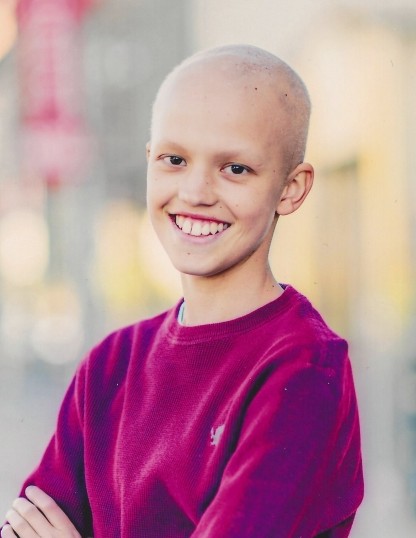 Landon Samuel Streadbeck, returned home to his Heavenly Father on Saturday, January 16, 2016 after a long and courageous battle with cancer.

He is the fifth of seven children, born Feb. 23, 2003, to Jeff and Annette Streadbeck and filled his place in the family perfectly.  Landon lived life to the fullest.  He was the thoughtful, kind and generous and made all those around him feel loved.  His big, bright smile was contagious and brought joy to many. Aside from his family, his greatest love was basketball.  He had a wonderful opportunity to travel to various parts of the country with his Elite basketball team.  He loved sinking three's and was fun to watch as he impressed the crowds with his beautiful shooting ability.  He also loved playing with his buddies on the local Morgan comp team.  He loved a good pick-up game with his cousins and friends, and would often play for hours or until dark.

Landon was an all out sports fanatic.  Ask him any day, any time who was playing, and he would know.  He especially loved the Utah Jazz and the Arizona Cardinals.

He loved going to the cabin and was always trying to get us up there.  He wanted all of the bedrooms decorated in "camo". He loved snowmobiling, four wheeling and hunting and just being outside. Although he loved sports and the outdoors, he never forgot the importance of his family and the gospel, especially during his battle with cancer.  Rain or shine, sick or healthy, Landon fulfilled his Priesthood duties. We would always joke that it would be impossible to turn away a bald headed boy collecting fast offerings- he knew how to work the system.

Landon continued to glow from head-to-toe as he fought his battle. He never complained, never had a bad attitude, and never stopped fighting.  He knew the importance of sharing the gospel and he never missed an opportunity to bear his testimony. He waited until his oldest sister returned from her mission before he returned home to continue his mission.

He was greeted in Heaven by his Grandma Norma Streadbeck.

Many special people in this world have made our grieving easier, specifically the doctors and staff at Primary Children's Hospital, the entire Morgan community, family, friends and teachers. Our Heavenly Father blessed us with Landon as our son and brother, but he will always belong to this community. Nothing we can say will express the amount of gratitude we feel for the constant prayers, fasts, and expressions of love. Thank you.

To order memorial trees or send flowers to the family in memory of Landon Streadbeck, please visit our flower store.