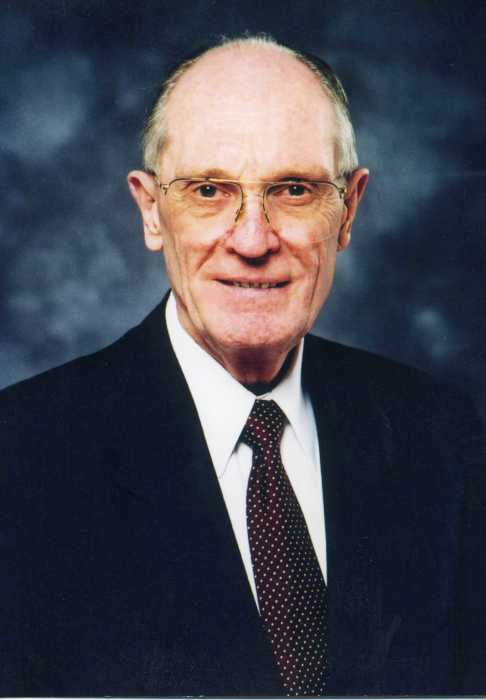 Lloyd Aldin Porter passed away on Monday, June 29, 2020, into the waiting arms of his sweetheart and eternal companion. He has missed her terribly since her passing  92 days earlier. Though he remained in good spirits and maintained a good humor, when Mom left, in large part, so did he. After 67 years together, the idea of being here without her was of no interest.

Aldin was born in Salt Lake City, Utah on June 30, 1931 to John Lloyd and Edris Revon Hayward Porter. He was welcomed by his sister, Veldaun and was joined years later by his sister, Connie. He was raised in Blackfoot and Idaho Falls, Idaho where he was happy and busy as he worked for his dad in his grocery store and was involved heavily in high school basketball and track where he excelled. He was also a serious student. He graduated from Idaho Falls High School and continued studies at BYU where he also ran track. In December of 1950 Aldin was blessed to serve as a full time missionary in the West Central States mission for the Church of Jesus Christ of Latter-Day Saints. There he met Shirley Faye Palmer who was also serving as a missionary. They were sealed for time and all eternity on February 19, 1953 in the Idaho Falls Temple.

After their marriage, Aldin and Shirley moved to Provo, Utah where Aldin pursued his education, graduating with a Bachelor’s Degree.

Aldin managed a highly successful financial planning office. It was a career he enjoyed as he felt he could improve the lives of others. To him, however, his most important calling was that of husband, father and disciple.

His greatest love and devotion was to the Lord Jesus Christ and His Kingdom. There wasn’t anything that could be asked of him by the Lord that he would not do.

Next was our mother. To him, she was an angel, sent by God. She was the light in his life from the day he met her.

We, his children, were third. Though he was always supportive of our interests, he never fussed much about what interests we pursued. What he cared most about was our discipleship. He wanted to see that our lives were patterned after the Savor’s life.

Aldin’s life was filled with service to the Lord. He was a young bishop, stake president, regional representative and patriarch. He was then called as a counselor in the Boise Idaho temple presidency when it first opened.

In 1986, he was then called to serve as mission president in the Louisiana, Baton Rouge mission where he served for a year, when he received a new calling to serve as a member of the First Quorum of Seventy. He served happily and tirelessly for 14 years in the Quorum with the last five as Senior President of the Seventy. Soon after that service was completed he was blessed, with his sweetheart, to serve as President and Matron of the Salt Lake Temple for three years. He and Shirley then taught an Institute class, Gospel Doctrine class, the Marriage and Family Relations class, and they served as ward missionaries together. It did not matter what his calling was. His focus was on serving where the Lord wanted him.

In 1997 Aldin was diagnosed with thyroid cancer. Through treatments and surgeries he was able to control the cancer until January of this year. When told that it had returned, he was at peace and even anxious to move forward so that he could continue the work of the Lord on the other side.

Aldin was welcomed on the other side of the veil by his sweetheart, Shirley, his   parents, his sister, Veldaun, his daughter, Sherie and his granddaughter, Beckie. His children Lorie (Edward) Watts, Julie (Ralph) Powell, Leslie (Blair) Scoresby, Brent (Melissa), John (Connie) son-in-law Kelly Wright, 31 grandchildren and 78 great grandchildren will miss him but are so grateful for the knowledge of eternal families. His beloved sister, Connie Wright, also survives him.

Due to COVID-19 there will be a private family service. We express great love and gratitude to the nurses that helped care for him during the past weeks. In lieu of flowers, contributions to the missionary department or temple department of the Church of Jesus Christ of Latter-day Saints would be appreciated.

To order memorial trees or send flowers to the family in memory of L. Aldin Porter, please visit our flower store.