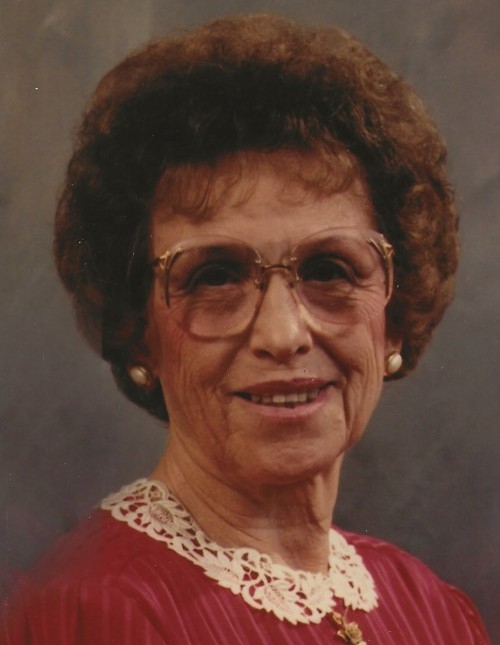 June Wright Calderwood Wilde – Born April 16, 1917 in Coalville Utah, died in Morgan Utah on Aug 6, 2020 at the age of 103 years young.  Her parents are William Earl Calderwood and  Mildred Wright. She had three brothers: Don, Keith and Bob. She was raised in Henefer, Utah, where her father taught school.

When she was in the 7th grade, she attended school at North Summit and graduated from there.

June married Carl Nix Wilde, November 25, 1937. Their marriage was solemnized in the Salt Lake Temple, 1939, along with their good friends Carlos and Delia Porter.

They raised two sons and a daughter: Kent, Scott and Connie.

They built their home and lived in Coalville for 74 years. Both sons served missions and at that time, June worked at the school lunch program at North Summit to help support their missions. Later she worked at the Summit County Hospital as Food Supervisor and Dietitian Assistant until the hospital closed in 1982.

She and her husband served in the Ogden Utah Temple as ordinance workers and she worked at the church name extraction program for 15 years.

Her hobbies were reading, crocheting and quilting. She has hand made many quilts, afghans, and shawls for her grandchildren and great grandchildren. Vacations with her family and friends were always a great joy in her life.

After the death of her father, she and her brothers took care of her mother for 15 years as she was crippled with arthritis and was unable to walk and confined to a wheelchair. She also helped care for Kelly’s father in his declining years.

She was a member of the Utah Daughters of Pioneers, Coalville Literary Club and Senior Citizens.

June was preceded in death by her husband, her parents and two brothers and their wives.  There will be a viewing on Thursday, August 13, 2020, from 10:00 to 12:00 noon at the Walker Mortuary, Morgan, Utah - followed by a funeral service beginning at 1:00 pm the same day at the Hoytsville Church.

We would like to especially thank Corey Blonquist, Jeanette Vernon and everybody at Family Tree.

To order memorial trees or send flowers to the family in memory of June Wilde, please visit our flower store.