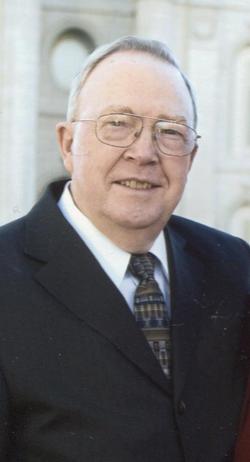 On Jan 5th 2015 our beloved husband, father, brother, grandfather, uncle, cousin and friend passed from this frail mortal existence into the arms of everlasting love. His battle with cancer he ultimately won, because he never allowed it to rob him of his wonderful attitude, which remained up until his last day with us.

Jerald Homer Nelson "Jerry" was born June 22, 1938 to Homer and Mary Nelson in Ogden, Utah. Jerry loved growing up in Morgan and often made the comment how he grew up in "the best place in the world." He always made friends easily and was often the companion to the "underdog." Growing up Jerry loved many sports activities including; Basketball, Football and track. His overall talents helped him excel to the point he later spent years playing basketball at the Milton Invitational Tournament. Dad was always known for his sportsmanship and ability to "laugh it off" when intense situations arose. He graduated from Morgan High School in 1957. He loved scouting and attended the World Scout Jamboree at the age of 16 and often commented on what an amazing experience that was.

Jerry grew up in the LDS faith and was baptized at the age of 8. He had a deep abiding love for the Gospel of Jesus Christ, which carried him through his entire life. At the age of 22 he left his home of Morgan to serve a full-time mission for the LDS church. He dearly loved the people of Holland and the many powerful experiences he had teaching and sharing the principles that had brought him so much JOY. He continued to be a missionary for the rest of his life. A few years later he met and fell in love with his eternal companion, Carol JoAnne Moore and they were married and sealed for time and all eternity in the SLC temple on Sept 2, 1965. One of dad's first callings as a young married couple was to be a Scout Master in the Ogden 17th Ward. Dad loved this calling and stayed in close contact with Rick Hadley over the years, one of his young scouts. This is a hallmark of dad and his relationships he formed over the years- a solid bond never to be broken. Dad was often referred to as the "REAL DEAL" and he most certainly was. In all areas of his life he put forth his best effort. His calling of father arrived in April of 1967 and from that time on dad was devoted to his sweet children and eventually grandchildren. Many wonderful memories were made with him, especially projects around the homestead, or camping in the mountains. Dad was a master teacher, always taking the time to share an insight or a principle he had recently studied. He was a true peacemaker, and was not one to ever stir up contention in any manner.

He had a great love for our country and served 6 years in the Air Force National Reserves and was dedicated to voting in regular elections and kept up on changing political views, putting much thought and prayer into his beliefs involving freedom and this great land we live in.

He was a hard worker and spent many years dedicated to Hercules Aerospace Division in Clearfield, where he was awarded "Crusader of the Year" for his innovative ideas to improve company standards. In 1994 dad was laid off from Hercules but did not let that discourage him. A short time later, Rex Jensen at Peterson Machine in Peterson hired dad and he spent 19 years working as a machinist and enjoyed his many friendships he made during that time there. He was known for mastering the Red Honing Machine, and always had brilliant ideas to assist his fellow co-workers in their individual responsibilities.

He had numerous callings in his church during his life but he most enjoyed teaching on any level-whether Sunday School, Elders Quorum or High Priests, he did his due diligence in studying and delivering the most effective lessons possible. He often bore his testimony in church and touched many hearts with his sweet humble way of expressing the things dear and tender to him.

In regards to music, dad loved a wide variety. His family will tell you that no matter what, he was our biggest "fan." He especially supported mom in all of her goals regarding her music and came up with creative and inventive ideas to make everything more special. Dad had a problem solving mind- so there were never problems... only solutions, and humor was usually part of the levity in any situation. Jerry was a marvelous carpenter and loved working with his hands. He was a master inventor, architect and builder. These are talents he mainly used at home to create beauty all around and simplicity for his loved ones. One of the reasons he kept going for so long, is he always had plenty of goals and projects to keep him busy and focused.

Diagnosed with Melanoma in his early 60's dad accepted each surgery with the grace of a true warrior. When diagnosed with metastatic melanoma in April 2012, he then took on that challenge with the faith of a true champion. He underwent a study for his type of cancer and successfully completed the study of that medication, until the cancer spread to the point he was told in Feb 2014, to go home and go on hospice. The doctors at Huntsman gave him 6 months to live. In true fashion of faith and determination dad then designed and built a Tuff Shed, carried on with teaching his church class as well as directing the music and finding various projects around the house to keep himself busy. He beat the odds by nearly 6 months.

This wonderful man has left an unforgettable mark on the lives of so many, and will be deeply missed by all who felt the touch of this masters hand. A life well lived. The family wishes to express the deepest appreciation to IHC Hospice and especially nurse Lissa for the loving care rendered.

To order memorial trees or send flowers to the family in memory of Jerald Nelson, please visit our flower store.