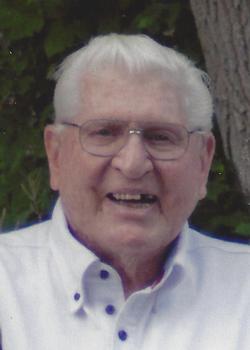 He was born June 16, 1919 to Lawrence Addison Porter and Gertrude Alice Florence at the family home in Porterville, Utah. He was born into a large family of four sisters and eight brothers.

He went to school in Porterville through the seventh grade. The last four years he attended and graduated from Morgan High School in the spring of 1936. He received an athletic scholarship from Weber Jr. College. He was an incredible athlete, playing both football and basketball in high school and college. For years he continued to play basketball and baseball. He played church basketball and on a Morgan team that participated in the Ogden City League. This team had incredible success and was recognized as one of the most outstanding teams in the state of Utah. He was recognized and awarded a plaque for being among the All Century Baseball greats from Morgan.

While in high school the country celebrated the Pony Express Diamond Jubilee with a re-enactment of the Pony Express. They carried the mail from St. Joseph Missouri, to Sacramento California. Dad was selected to ride his horse carrying the mail for a leg of the re-enactment celebration. He was very proud of that.

He married Vera Alice Carter in the Salt Lake Temple on May 2, 1941. When they were first married they lived in Murray, Utah where Dad worked at the American Smelting and Refining of Murray until he was drafted into the army during World War II. He served in Europe and The Persian Gulf. After he returned from the Army he stayed in Morgan, where he spent the remainder of his life.

He worked at the Navy Base, Utah Poultry, Marquardt, Hercules Powder Co, and Hill Air Force Base until his retirement in 1982.

He is a member of the LDS Church and served in many church callings which included Executive Secretary for three Stake Presidents. He enjoyed studying the gospel, preparing talks and giving them. His life touched so many and reflected the pure love of Christ.

He loved the beauty of nature, the outdoors and always looked forward to the hunting and fishing seasons. Dad loved people and doing things for others. He was famous for his coconut cakes, cooked pheasants, fish and his breakfasts, which he shared with so many. He loved his family and always enjoyed being with them. He was always playing jokes on us, had hundreds of funny sayings and loved to make you laugh.

He was preceeded in death by his wife Vera, of 63 years, two baby sons, his parents, three sisters and eight brothers.

As a family we would like to thank Shad Preece from Access Hospice and Laura and Ashley from Legacy Home Health for their help and care of Dad.

His passing will leave a huge void in our lives. We love you Dad!

To order memorial trees or send flowers to the family in memory of Jay Porter, please visit our flower store.