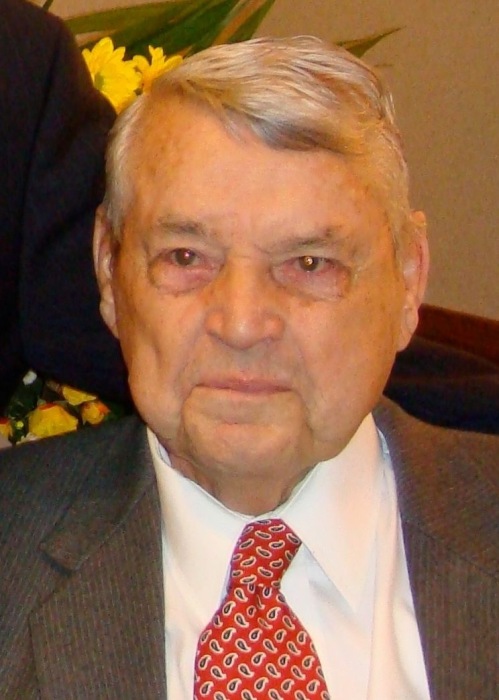 Howard Lamar Lund, age 90, passed away peacefully of complications from pneumonia on May 4, 2016, in Morgan, Utah. He was born on July 10, 1925, in Logan, Utah to Yeppa and Veda Scott Lund. As a young boy, he lived in Logan Utah. As a young man, his father moved the family to Washington D.C. Howard worked as a Page Boy in Washington D.C until he was 17 years old and graduated from the Capitol Page School. After graduation, Howard entered the Army Air Corps Aviation Cadet program. In 1943, Howard joined the Army Air Corps. While stationed in Roswell, New Mexico, Howard was set up on a blind date for a Valentine’s Day dance.  That blind date would become the love of his life. He married Betty Jean Hinton on September 27, 1946, in Roswell, New Mexico. They had two children and 65 joyful years together until Betty passed in 2011.

Over the years serving in the Air Force, Howard and Betty lived in many places- New Mexico, Florida, Georgia, California, Texas and Japan. After returning from Japan, Howard graduated from Oklahoma State University with an Electrical Engineering Degree.  Howard retired from the Air Force as a Lt. Colonel with 22 years of service and started working as a General Contractor in Menlo Park, California. Howard was a dedicated member of the Church of Jesus Christ of Latter-day Saints. He loved the Savior and faithfully spent many years of his life in church service.  He served as Young Men’s president, counselor in two bishoprics, bishop and served two stake missions. In 1974, Howard and Betty served together in the Calgary Alberta Mission. After being home for just three weeks, Howard was called to open up the Canada Winnipeg mission and serve as its first mission president from 1976-79. This mission just celebrated its 40th anniversary and President Lund was able to be with his dear missionaries at the reunion.

He loved to be outside working on the “farm” in Morgan. He worked hard taking care of their property and taught his posterity the value of hard work, effort and determination. His arms were always tanned from spending hours in the sun taking care of the farm and gardening with his dear wife Betty. He loved to golf with his son, son-in-law and grandsons along with many of his dear friends in the Morgan Valley and later St. George, Utah. Throughout his life, his influence and service touched so many.

Services will be held Saturday May 7, 2016. A viewing will be held from 9:30-10:45am with the funeral service at 11am at the Porterville building 2700 South Morgan Valley Drive, Morgan, Utah 84050. Interment: South Morgan Cemetery.

To order memorial trees or send flowers to the family in memory of Howard Lund, please visit our flower store.