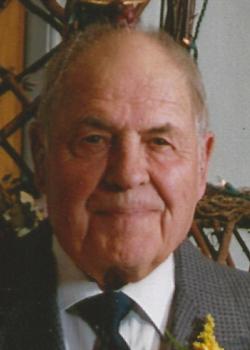 COALVILLE – Glen passed away peacefully on May 25, 2014.  He was born on July 21, 1925, to William Vern and Barbara Morby Blonquist, in Coallville, Utah where he spent his entire life. When he returned home from the war, he married Barbara Wheaton and together they had five children.  Glen (Tish) Tampa, Fla., Christine Hulse (Roger) Salt Lake, Russell (Deceased), Ben (Pam) Coalville, & Michael (Patty) Las Vegas, Nv.

Upon graduation from North Summit High School, Glen went into the U.S. Navy and was a Veteran of World War II.  He received a Purple Heart and a Bronze Star for his heroism and bravery .  He married his high school sweetheart, “Bubbles”. They would be celebrating 68 years of marriage this June.  Together they raised their five children in Coalville.  Dad was always so proud of us and all our accomplishments.

He was an avid outdoorsman and loved to go golfing, fishing, hunting, and on camping trips to South Fork and on the Bear River.  He enjoyed being a Boy Scout Leader and a Hunter Safety Instructor while his boys were growing up. He wanted them to enjoy the outdoors as much as he did.

He was a hard worker all his life.  His first job was with Moore Motor Co. where he was a mechanic.  His love of fixing cars never died.  He then worked at the Ideal Cement Plant in Devil Slide, Utah.  He left there to become the Coalville Postmaster where he retired after 25 years of service.  He worked side by side with his wife 24 out of the 25 years.

Glen is preceded in death by his parents, a brother, Richard, a sister, Barbara Pace, and his son Russell.

We would like to give a special thanks to the staff at The Family Tree Assisted Living Center for their excellent care and patience they offered to Dad during his stay with them.

To order memorial trees or send flowers to the family in memory of Glen Blonquist, please visit our flower store.