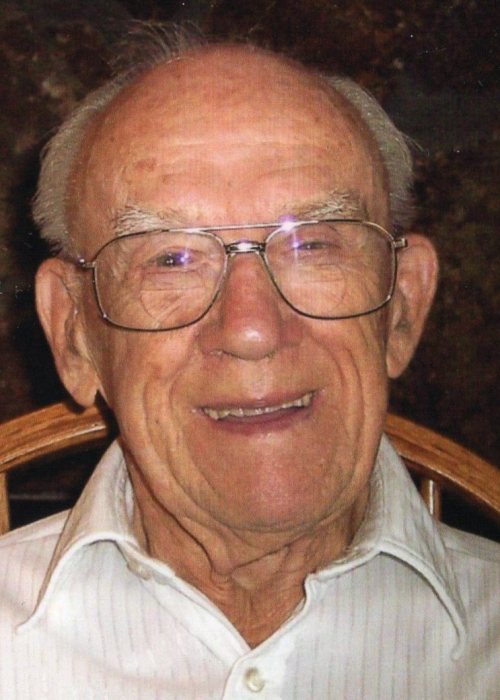 Frank Lloyd Wilson, age 102, passed away March 7, 2016. He was born on September 28, 1913 in Shippensburg, Pennsylvania, to Leland and Ada Neusbaum Wilson.  As a young man he worked as an ordinance inspector for the U.S. Government until he was drafted into World War II.  He served in the 3rd Army under George S. Patton Jr.  He was severely wounded in Cherbourg, France and spent many years recovering.

He moved to Las Vegas, Nevada where he was employed at the Centel Telephone Company where he retired in 1976.  While in Las Vegas he met and married Ileta Lamb in the St. George LDS Temple.  After his retirement they settled back in Ileta’s hometown of Mountain Green, Utah.

After Mary’s passing he was single for a few years and at 97 years old he married Wilda Kay Michael in the Bountiful LDS Temple.

He was blessed to have three loving wives with children that he loved and made his own.

Frank enjoyed hunting and camping throughout his life and was an avid gardener.  He served faithfully in many callings in the Church of Jesus Christ of Latter-Day Saints and had a strong and abiding testimony of our Lord and Savior Jesus Christ.

Frank devoted his retirement to genealogy work and to Christ like service for others.  Frank was beloved throughout the Morgan Valley and will be great missed.

To order memorial trees or send flowers to the family in memory of Frank Wilson, please visit our flower store.