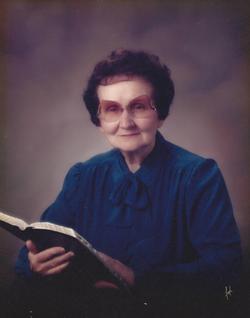 She was an active member of the L.D.S. Church and served in many positions including ordinance worker in the Ogden and Atlanta Temples.  She was a Relief Society visiting teacher for over 71 years.  She loved genealogy research and completed many names for her and her husband’s ancestors.

Her greatest joy and happiness came from her beloved family, finding great pleasure in their achievements.  She was proud of and honored her noble heritage.  She highly honored her membership in the L.D.S. Church and had a strong testimony of the truthfulness of it and of the precious work given us to do here on the earth.

She was preceded in death by her husband, parents, sons Frank and John, Jr., grandson Cameron and granddaughter Pamela, six brothers and five sisters.

Interment will be at the Coalville City Cemetery.

Many thanks to everyone who gave such loving care of our Mother.

To order memorial trees or send flowers to the family in memory of Ella Adkins, please visit our flower store.