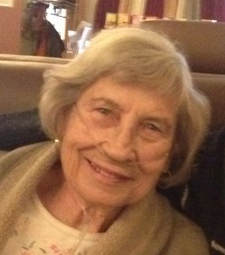 Doris R Hardin passed away at her home in Coalville Utah on Wednesday May 31, 2017 at the age of 88.

Doris is predeceased by her parents, Helen Eurs Ramalho and John Ramalho and her Aunt Etta Eurs, who raised Doris following her mother’s death at age 9.

Doris is survived by her loving husband Harold of 65 years. They were married in Culver City California on October 27, 1951.

Doris was born in Brooklyn NY in 1928. She was raised in Flemington NJ, graduated from Flemington HS in 1946 and went on to earn a Degree in English from Duke University in 1950 on a scholarship. She graduated in oldest honor society for the liberal arts and sciences in the United States, Phi Beta Kappa. Doris worked in CA as a school teacher where she met the love of her life Harold Hardin. Harold became a career officer in the US Army and Doris worked diligently to support her husband’s career and was instrument in Harold achieving the rank of Lieutenant General in the US Army. Being a military spouse had Doris packing and moving her 4 children to a new state almost annually did not keep her from being active in the support of military enlisted and officer’s families. She had a particular passion for helping better the life of the enlisted soldier families. She gave annually to several charities. She loved birdwatching, collecting stamps, all kinds of music particularly symphony and Rock and Roll of the 60’s and 80, the NY Yankees, Washington Redskins and especially her Duke Blue Devils. Doris served in the past as a board member with the North Summit Senior Center and was a member of St Mary’s Catholic Church in Park City UT. In lieu of flower please give to your favorite local charity in her name. Service and burial will be held at Arlington National Cemetery time and date TBD

To order memorial trees or send flowers to the family in memory of Doris Hardin, please visit our flower store.