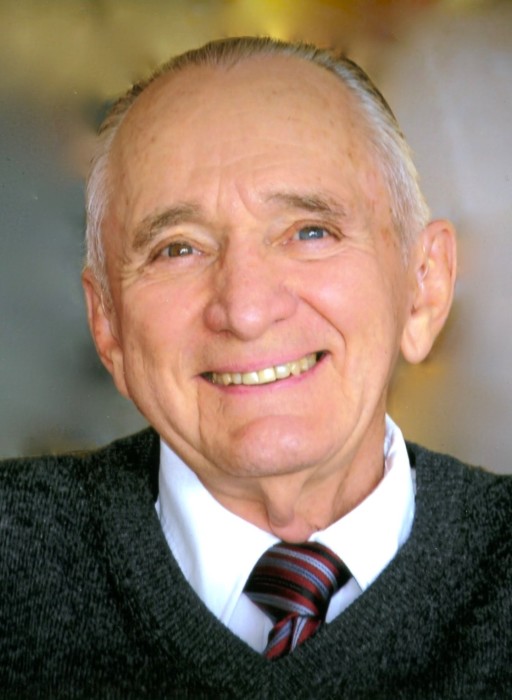 Donald George Thiriot, age 90, passed away peacefully in his sleep on Sunday morning, November 15, 2020. Don was born on March 7, 1930 in Salt Lake City, Utah to Ralph Eugene Thiriot and Rhea B. Swan. He had one older brother, Ralph, Jr. After graduating from East High School, he attended the University of Utah and was a drummer in the Ute marching band. He married his high school sweetheart, Mary Louise Johnson, in the Salt Lake Temple on September 1, 1949. Soon after, he served a mission for the Church of Jesus Christ of Latter-Day Saints in the Great Lakes Mission, from 1951-1953. In 1954, Don and Louise had their son, Blaine. Sixteen months later, Louise tragically died after being thrown from a horse.

Don and his friend, Alan Hicken, started a fiberglass company, called Fibron. They opened a workshop in Hoytsville, Utah, where, among other projects, they made fiberglass dairy tanks for Brown’s Dairy.

In Coalville, he met Helen Bullock and her young daughter, Lori. Don and Helen quickly fell in love and were soon married in the Salt Lake Temple on December 30, 1960. They began their life together as an instant family of four, Don, Helen, Blaine (6) and Lori (5). They bought their current home and their family grew to include three more children, Bart, Emalie, and Amiee.

After completing a Bachelor of Science degree in Industrial Education from Brigham Young University, Don attended Stout State University in Menomonie, Wisconsin and earned his Master’s degree in Industrial Education. He then began his 30-year teaching career at East High, his own alma mater. He also started the school’s archery program and coached several state archery championship teams. He loved teaching so much that when he got his first paycheck, he told Helen, “I can’t believe they are paying me for this!”

Don enjoyed working with youth in the Boy Scouts of America for close to 20 years and received the Silver Beaver award in 1986. He also served in various church callings, most notably as the Gospel Doctrine teacher for over 30 years. Don and Helen, whom he called "his sweetheart and eternal companion," especially loved their time serving together as senior missionaries in the England London South Mission from 1998-2000.

Don also put his time, talent, and energy into developing the family business called Holliday Hills. He built the log cabin General Store, added on to the Huddle Drive-in, created a skating rink in the winters, and maintained the trailer pads and grounds.

In his retirement years, he spent most days at Diamond T, the family property at Echo Creek Ranches. For more than 40 years, he worked on building a geodesic dome cabin, and assembling and laying railroad track for a ride-on miniature Union Pacific train.

Don was most happy when he was making memories with his family. He loved camping, snow-skiing, snowmobiling, and hunting. He enjoyed going to Bear Lake, water-skiing and sailing. He was incredibly talented, creative and could build or fix anything. He never missed a teachable moment and shared his knowledge and skills with family, friends, and all those lucky enough to have known him. His influence was felt by so many.

Donald is preceded in death by his parents, his brother Ralph, his first wife Louise, and his son Blaine. He will be greatly missed by Jean Thiriot, Lori & Glen Miller, Bart & Wendy Thiriot, Emalie & Todd McKee, Amiee & Lance Davidson, 19 grandchildren and spouses, and 28 great-grandchildren.

The family would like to thank caregivers of Canyon Home Health and Hospice for their tender care and support during Don’s last days.

Interment will be at the Coalville City Cemetery.

Due to Covid-19 restrictions, the funeral service will be attended by immediate family members only. Please join us on Donald’s page on www.walker-mortuary.com to live stream the service on Saturday, November 21, 2020 at 1:00 pm.

To order memorial trees or send flowers to the family in memory of Donald Thiriot, please visit our flower store.