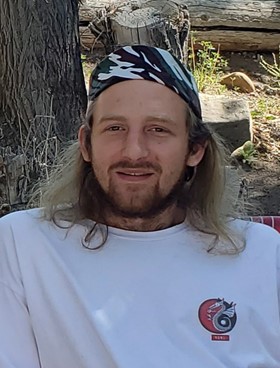 Devin was born on February 22, 1994, to Robert Alden Workman and Paula Denice Knuth.  He was one of six children (four older sisters passed away prior to his birth).  His early years were in Coalville where he attended some of his elementary school.  His education continued in Magna, Utah attending Brockbank Jr. High and Cyprus High School.

Devin’s passion was his artwork, gaming, and his interest in lifting people, when they couldn’t lift themselves.  His infectious smile and unique sense of humor were tools he used often to cheer friends and family and change their moods.  He was generous to a fault and wouldn’t think twice about giving his shirt, shoes, or something he had to someone in need.  While it was so important for him lift others, he couldn’t manage to boost himself up in recent months.  Unfortunately, Devin’s final path on earth is irreversible.  He will now walk with those who have gone before him, his guardian angels.

Our hearts are broken, and Devin will be sorely missed.  We will miss his unending hugs, his voice, his contagious smile and humor, his artwork, and his love for life when he was in a good place.

We want to thank Jami Ojeda, his partner and girlfriend, and her daughter Jerika, for being supportive and encouraging through the last couple of years.

A short graveside service will be held for family and friends in Coalville –
August 6, 2021, at 10:00 am
Coalville Cemetery
North Industrial Park Road
Coalville, Utah 84017

Followed by a Celebration of Life

Please bring a potluck side dish and a story about Devin

To order memorial trees or send flowers to the family in memory of Devin Workman, please visit our flower store.