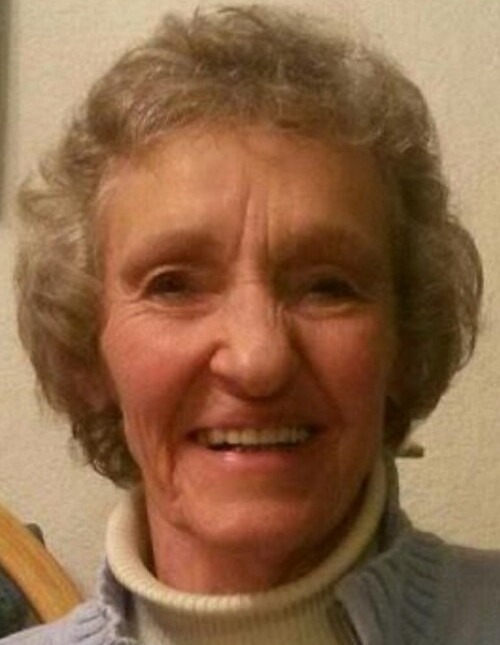 Delora Sherwood Dudley Fackrell was born on October 11, 1936 to Hosmer and Myrtle Dudley. She was the youngest of their four daughters and one half-sister.  She spent much of her childhood on her family’s 40 acre farm in Glenwood, Alberta Canada. A self-proclaimed tomboy, her time there would impress upon her a great love for the outdoors, which later took the form of family camping trips with her own children, and long hours in the garden.

Her family left the Glenwood farm when Delora was ten years old, traveling roughly twenty miles away to the neighboring town of Cardston, where her father helped care for a relative’s sheep and cattle. Each day brought a short walk down the road to the local school, a journey which many may have dreaded but Delora eagerly anticipated. She loved school, and continued to enjoy it throughout her family’s many subsequent moves.

By the age of twelve, she had immigrated to the United States, where the family settled alongside the Columbia River in Kennewick, Washington. When her mother was called away to Sacramento, California to care for her ailing sister, the family wasn’t far behind. They relocated to the Golden State as soon as the girls had finished the school year and Delora enjoyed a summer of sunshine and trips to the local pool before she left to live with her sister, Thelma, in Tremonton, Utah. She spent a year there, and another in Brigham City before she moved with her parents to Salt Lake City. It was there, while living in a small apartment blanketed by the noise of a springtime city, that Delora first met Melvin Fackrell. Both lifelong members of the Church of Jesus Christ of Latter-day Saints, they locked eyes across a small congregation one Sunday and quite literally never looked back. Activities with a large group of mutual friends gradually turned into dates.  They were married one year later in the Salt Lake Temple on April 1, 1952.

From there they moved throughout Salt Lake City, and later, Bountiful, as they created a life together and raised their growing family. Married women were not able to attend school at that time so Delora began working, though she stopped soon after she became pregnant and morning sickness overstayed its welcome well into the afternoon. She cherished her opportunity to be a young mother, and she and Melvin were blessed with six children, many of whom were grown and married by the time the couple made their permanent home in Porterville, Utah. She later returned to school to earn her GED.

Delora had great faith in and love for her Savior, Jesus Christ. She served in many church callings within the primary and young women’s organization, and she particularly loved her time as the Relief Society president in her ward. Her mother instilled in her an appreciation for genealogy work, and she and Melvin treasured their opportunity to serve a mission at the Family History Library in Salt Lake City in 2002. In 2011 they served in the Ogden Inner City Mission. They also enjoyed their time serving as ordinance workers in the Ogden Temple

She was exceptionally proud of her children and grandchildren, and loved to share in their experiences and accomplishments. Forever attending birthday parties, dance recitals, and school concerts, she was a devoted documentarian of their many achievements and she never hesitated to share the stories of their successes with others. She and Mel were the adoring grandparents of 26 grandchildren, 53 great-grandchildren, and two great-great grandchildren, with more on the way.

Delora loved to crochet, sew, decorate wedding cakes, and knew how to make a pretty fantastic frog-eye salad. Famous among her grandchildren and neighbors for her fresh-baked bread, Delora spent years perfecting her recipe because she knew that Mel preferred it to store-bought bread. Their marriage was a happy one as they expressed their love through thoughtful kindness and support. This was especially evident in the gentle, patient way Melvin cared for her throughout the final six months that she valiantly battled cancer. She passed away in the early morning hours of Sunday, May 15, 2022, in the same way she had lived most of her life-beside her sweetheart, Mel. They had been married for 70 years. She was 85.

Delora was preceded in death by her parents, sisters: Vila and Thelma; half sister, Bernice; son, Brian, and great granddaughter Eva.

There will be a viewing on Friday, May 20, from 6-8 pm at the Walker Mortuary in Morgan (45 West 200 North, Morgan, Utah), and 12:45 – 1:45 pm on Saturday, May 21 at the Porterville Church of Jesus Christ of Latter-day Saints (2700 South Morgan Valley Drive, Porterville, Utah). Funeral services will be held in the same building starting at 2 pm. She will be interred at the South Morgan Cemetery at 335 South State Street, Morgan, Utah.

To order memorial trees or send flowers to the family in memory of Delora Fackrell, please visit our flower store.