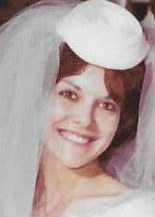 Carolyn was born January 3, 1943 in Salt Lake City, UT to Lorin and LaVell Barnson.  She married Manny Hasoppe on February 2, 1963 in Elsinore, UT.  They were later sealed for time and all eternity in the Jordan River Temple.

Carolyn’s grandchildren were the light of her life.  She loved spending each day with them.  Her whole world revolved around running them around and supporting them in all of their activities.  She loved having sleepovers.  She would feed them all their favorite foods.  They all knew they could have anything they wanted at Grandma’s house.  Carolyn loved to cook, bake, make Christmas candy and enjoyed reading and collecting books.  I don’t think she ever read all of them.  Carolyn served as PTA president for two years at Terra Linda Elementary.  She worked at Darrell’s downtown doing hair until Manny built her beauty shop in the house so she could be home with her children.  Carolyn also loved going to club once a month with the girls, racing quarter horses with Manny, and spending time with all her family and friends.  She served in many church callings but her favorite was as a visiting teacher.  In the last few years Carolyn enjoyed spending time with her friend Inga reminiscing and attending church together. Manny and Carolyn did everything together.  Now as they are reunited with Todd they are rejoicing in their reunion and preparing a place for all of us to be together again.

We would like to give a special thank you to nurse Karen for all the love and service over the years.  Also to all her loving neighbors, friends and family who have loved Carolyn.

To order memorial trees or send flowers to the family in memory of Carolyn Hasoppe, please visit our flower store.