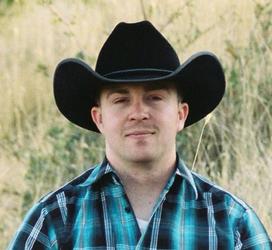 Our hearts are broken because, our “Man From Snowy River”, Bryce Wayne Ehlert, 29, was called home on Sunday, November 2, 2014 due to complications from his fourth open-heart surgery for a congenital heart defect (truncus arteriosus) and advanced heart failure.

He grew up in Provo and Spanish Fork, graduating a “Don” with the class of 2004 from Spanish Fork High School.  He was employed as a phlebotomist for ARUP Labs at the University of Utah Hospital in Salt Lake City.

Bryce only wanted to be a cowboy when he grew up.  He loved the outdoors, his 3 dogs, 2 goats, horses, cowboy boots, cowboy hat, motorcycles, ATV's, camping, hiking, fishing, driving, family gatherings, barbecues, board games, the small town of Coalville, and spending time with his wife.

On 10-11-12, he married the love of his life, a cowgirl and championship barrel racer, Nadine Lynn Kern.  He cherished everyday he spent with her!

In lieu of flowers, donations can be made at any Wells Fargo bank , “Bryce Ehlert memorial fund”.

To order memorial trees or send flowers to the family in memory of Bryce Ehlert, please visit our flower store.