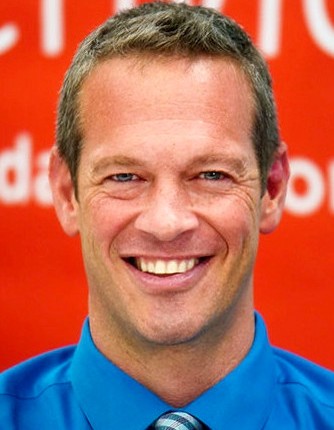 Bradach “Brady” Black Fitzwater was born at Penrose Hospital in Colorado Springs, Colorado on September 3, 1977. He was the fourth child of Kevin and Rae Lynn (Black) Fitzwater. He had three older sisters, one younger sister, and finally, the brother he always hoped for.

Brady was raised in Colorado Springs. He attended Helen Keller Elementary School, Charles M. Russell Junior High School, and Thomas B. Doherty High School. He excelled academically. At Russell, he was recognized as Athlete of the Year, and was recently inducted to the Russell Middle School Wall of Fame. At Doherty, he was prom king, and winner of both the Mr. D competition and the slam-dunk contest (winning with a two-handed 360 degree windmill tomahawk slam-dunk, a singular accomplishment in the history of Doherty basketball). He was markedly good-natured and friendly to all.

Brady has lived and worked in San Diego, Austin, and Colorado Springs. He worked in nonprofit finance and operations management, most recently as a chief finance and operating officer in the healthcare industry. He was passionate about improving his community and served on various boards of directors.

Among his many hobbies and interests, Brady loved to read, play the guitar, and write song lyrics. He was an excellent athlete and a great dancer (Swing Champion of Colorado). He recently completed his yoga instructor certification. Brady was at home in the outdoors, and especially loved spending time each summer at his Grandma Beth’s lake cabin in McCall, Idaho.

Brady died at age 41, on December 23, 2018, the result of a long and difficult fight against depression and alcoholism.

To order memorial trees or send flowers to the family in memory of Bradach "Brady" Fitzwater, please visit our flower store.