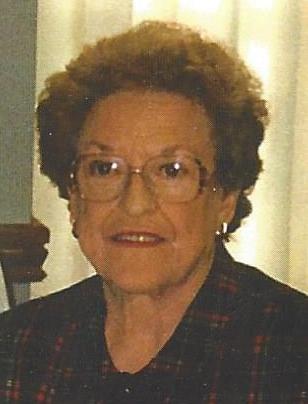 Betty Melissa Oliver Smith died May 19, 2016 in Ogden, Utah.  She was born January 14, 1925 in Sego (Grand County), Utah to Paul and Mabel Oliver. She attended school in Orem, Utah at both Lincoln High School and Provo High School where she graduated in 1943.

At the age of 19 she moved to Alameda, California where she worked at the Alameda Naval Air Station. On December 20, 1947, she married Robert Leland Smith.  Their first son, Jan Robert was born in November 1949.  Five years later, in September 1954, their second son Chad Elliot was born.

While in Alameda, Betty was active in the LDS Church.  She was also involved with the Alameda City and County March of Dimes, PTA, and The Guide Dogs for the Blind Organization, and The Children’s Home Society.

In 1974 Bob, Betty and their son Chad moved to Morgan, Utah to be near their other son Jan and his family.

Over a period of time, Betty traveled to many different countries. She especially enjoyed cruises.  She moved from Morgan to Ogden, Utah in 2001.

Betty was preceded in death by her son Jan (1991) and her husband Bob(1993), her parents Paul and Mabel Oliver, her sisters Thelma Oliver, Katherine Marshall, Rubye Taylor, Elaine Hammett, and her brothers Chester, Frank, Paul , Claude and Lavar Oliver.

Interment will be at South Morgan Cemetery.

To order memorial trees or send flowers to the family in memory of Betty Smith, please visit our flower store.