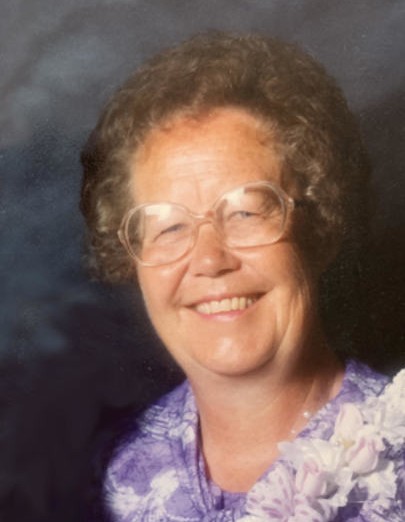 She was born October 2, 1933 in Heber City, Utah to George L. and Minerva Adaline Anderson. She was raised in Talmage, Utah and loved growing up on the dairy farm. She was active in 4-H and enjoyed being a Junior Leader. During High School she played the Cornet in the Marching Band and was in the Pep Club. She graduated from Altamont High School in 1951 as the Valedictorian.

Bertha served a mission in the North Central States Mission which covered Minnesota, North and South Dakota and part of Canada. She traveled extensively in the United States and parts of Canada. She and Dean served a mission to the Florida Deseret Cattle Ranch where she was the office secretary and supervisor over all the sister missionaries in the mission.

She graduated from BYU in 1955 and went to work as a Secretary in Washington DC, Salt Lake City and at BYU. She desired to find a teaching position and located one at North Summit High in Coalville, Utah. She taught Type, Short Hand, Office Practices and 8th Grade English for 6 years. She left North Summit to accept a job at Grantsville High, but was only there for a few months prior to he marriage.

She married Dean Braithwaite in the Salt Lake Temple November 6, 1969 following the death of his first wife Beulah. She became an instant stepmother to Dean and Beulah’s 6 children.

She was a member of the Hoytsville 1st Ward and served as a Visiting Teacher, Ward Relief Society President, and multiple others. She and Dean also served as the Ward Cleaning Specialists.

She is proceeded in death by her spouse, Dean Braithwaite, parents, 2 brothers, 1 sister, and a great granddaughter.

Special thanks go to the Family Tree Staff in Morgan along with Corey Blonquist and Jeannette Vernon for the tender loving care they provided Bertha.

To order memorial trees or send flowers to the family in memory of Bertha Braithwaite, please visit our flower store.