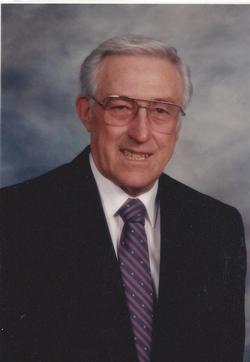 Alton Brice Olsen, 83, passed away peacefully at home Wednesday, July 30, 2014 with his loving wife by his side. The youngest child of Carl Antone and Hazel Louise Madsen Olsen, he was born May 7, 1931 in Milton.

Alton married the love of his life, Patricia Mortenson, on August 26, 1955 and had three girls.

Alton graduated from Morgan High School where he played basketball and was quarterback on the football team for four years. He was an avid sports person and was on the "Chain Gang" for years. He loved to hunt and fish and was a member of the "Ruptured Rangers." He loved to watch the Jazz play. He was an avid bowler and had won many awards. He and Pat also loved to Square Dance and belonged to a group. Alton and Pat loved to travel to the church history sites.

Alton served in the Korean War from July 15, 1952 to May 26, 1954. He worked for Utah Power and Light and was electrocuted in 1968. He had many heart surgeries and was blind for several years. He was a handy-man and could fix anything.

The gospel had been an important part of his life. He served in many positions in the LDS Church. He loved singing in the choir. Alton and Pat served a mission to San Bernardino, California. He is survived by his wife Pat and daughters, Mitzi (Kirk) Ralphs, Wendy (Robert) Mikesell, and Raquel (Lance) Kuehne; ten grandchildren and 12 great-grandchildren.

He was preceded in death by his parents and siblings and one grandson, Colt Brice Ralphs.

To order memorial trees or send flowers to the family in memory of Alton Olsen, please visit our flower store.