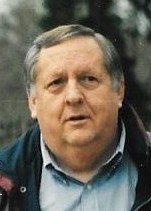 WANSHIP - Alfred Brent Ball, age 71, of Wanship, Utah, passed away peacefully on July 10th, 2015, after several years of living with dementia. He was born in Coalville, Utah, on December 21, 1943, to Mick and Mary Ball.  He attended North Summit High School and the University of Utah.  Brent married Joyce Bates on May 15, 1964 in the Salt Lake Temple.  They are the parents of 3 children, Wendy, Jeff and Greg.  They spent the early years of their marriage in Sugarhouse.  After building the Rafter B Gas N’ Grub in 1978 they moved back to Wanship to be near the business.  Brent worked for the Park City Police Department and later for the Summit County Sheriff’s Office in dispatch and communications and retired from service with Summit County.  He was a life-long University of Utah athletic fan and enjoyed coaching high school football at North Summit.  He enjoyed boating and 4-wheeling with his children and grandchildren.  He is survived by his wife, Joyce, of Wanship; daughter Wendy of Wanship; son Greg (Laura) of Layton; grandchildren Kyler, Kendrick, Jeffrey, Katie and Matthew. He was preceded in death by his son, Elder Jeff Ball and brother, Roger. His family extends sincere gratitude to Encompass Home Health for their excellent care and service.

To order memorial trees or send flowers to the family in memory of Alfred Brent Ball, please visit our flower store.